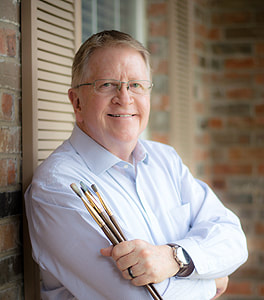 Bio - Anything But a Normal Path to Art

​A long time ago in the small town (at the time) of American Fork, Utah, there was a baby born who would grow to love hiking in the Wasatch Mountains near his home. He was raised in his lower middle-class family by his dad who was a steel-worker, and his mom who was a 1950’s housewife/stay-at-home mom. His childhood was spent going to school, doing his homework, drawing, swimming, and camping with the family, on his own, and with the scouts. His talent for art was recognized in his childhood and it was one of his favorite activities. In his pre-teen and teenage years, he grew to be a super-skinny kid who expanded his passions to the theater program in high school and being involved in all kinds of high school activities in general.

This kid was Michael Frank Peterson who currently creates Painted Layered Glass Sculptures. In high school, Mike forgot about art except on occasional opportunities until his senior year when he signed up for two art classes to fill out his schedule. He aced them both. That was ironic because he was usually the first one in the classes to start talking and the last one to stop. Still, he got A’s in both classes.

Mike enrolled at Brigham Young University after High School and majored in Fine Art. He wondered why because he was super-active in drama his first year. Something inside him kept telling him to major in art, so he did, against his “better judgement.” During his second year, however, Mike decided that even though drama and theater offered him applause and adventure, art offered him an actual career.

His parents were VERY concerned about him being a starving artist. His dad even offered to get him a good job at the steel plant where he worked. That was about the last thing Michael wanted to do.

There was no money to send kids to college in his family, so Mike had to pay for his own degree by working part time and going to school full time and visa-versa. Working to pay for college extended his time in school a year and a half, but he learned to scramble, save, and work to get what he wanted. It was a lesson that would serve him well all his life.

After graduation, Mike worked in Salt Lake City and met Ann Molen, the woman he would marry after a lengthy courtship. At the time they were married, they moved to Arlington, Texas for his job. They raised a family and Arlington is where they call home.

Mike found work as a trade show exhibit designer in which career he worked for thirty-four-years. It was a career he loved. Eventually he became a Design Director for four different full-service exhibit companies and was a freelance exhibit designer for ten years. When asked what he did for fun, he would say “My job!”

Spoiler Alert! You are probably wondering where this is all going. It will be the skills and love for three-dimensional design combined with oil painting that would lead him to his unique style of sculpture that got him noticed and set his art career on fire.

Mike loved oil painting and developed his skills to a professional level. He painted as a hobby his adult life except a fifteen-year break when life got too demanding.

When Mike retired, he worked part time in a hobby store. He would walk through the art aisles and think that it would be cool to get back into oil painting again. He set up a home studio and started oil painting as a hobby again for a year. Then he wondered if he had what it took to make it as a professional artist. He found another career that he loved.

As a professional artist, Mike sold his paintings online and in person. He was juried into art shows in Texas and Salt Lake City. While he loved oil painting in both traditional and contemporary styles, he missed doing three-dimensional design. Mike wondered if he could do something to make his paintings three dimensional. He would experiment with painting on glass panels and assembling them into shadow boxes. His first one was very simple. He completed two more shadow boxes that were more complex and took them to a premier art show along with his usual paintings.

After that show closed, which was in December of 2019, he was driving home and asked himself a few questions.
“What am I doing that would differentiate my art from all the other artists?”
“What is it about my art that would make it memorable to the viewers after the show?”
"What is it about my art that would make it a must-have among collectors?”
His answer was “Nothing! Absolutely nothing!” He realized he was a professional level “me too” artist showing at art shows with very talented artists who were doing basically the same thing. He also thought about how his layered glass art in the shadow boxes got more attention and positive response than all the rest of his paintings combined! That was when he decided that maybe the layered glass art held some possibilities.

In the first of 2020, he started experimenting in earnest with layers of glass to find out what worked and what didn’t.  Then the pandemic lock downs came, and he spent a great deal of time researching, experimenting, and developing the concept of oil paintings on open layered glass sculptures. When Mike debuted them in October of 2020, the reaction was one of excitement, awe, and wonder. Viewers said they were beautiful, exciting, and they had never seen anything like this before.

Mike’s layered glass sculptures had an immediate impact. People who were admirers of his work became raving fans. He was invited by Artsy Shark to become a featured artist for their December 2020 website. He was invited to display his work in the New Beginnings Art Exhibition in Dallas, Texas in December 2020. Mike was also invited to the Mother’s Day Art and Garden Festival in Trophy Club, Texas in May 2021. He was immediately accepted into his first gallery, Show Me the Monet Gallery of Fine Art in Arlington, Texas. Several of his works have sold there and now they are ordering sculptures before he creates them. He was accepted into the Giddens Gallery of Fine Art in Grapevine, Texas and has sold several works there. He is now planning to expand to other galleries as well. All of this happened within one year after debuting his sculptures in October 2020!

This style is indeed rare in the art field, and it gave him freedom and possibilities that he never had before, and Michael continues to improve and produce his unique sculptures to make them better and more beautiful. He loves to demonstrate the effect that lighting can have on his work and is always experimenting to see how he can improve what he has developed, including creating reflections in lakes that are awe-inspiring. Mike can truly say that he has come full circle back to his first love, fine art.

There are three criteria are important to Mike when he chooses his subject matter. He doesn’t need all three, but he uses as many as he can.
First, is “Does the subject or scene lend itself to layers and three-dimensions?”  The second one is nature, especially mountains and lush foliage as that always tugs at his heart with memories of his growing up years. The third is to include design principles and elements, either subtlety or boldly.